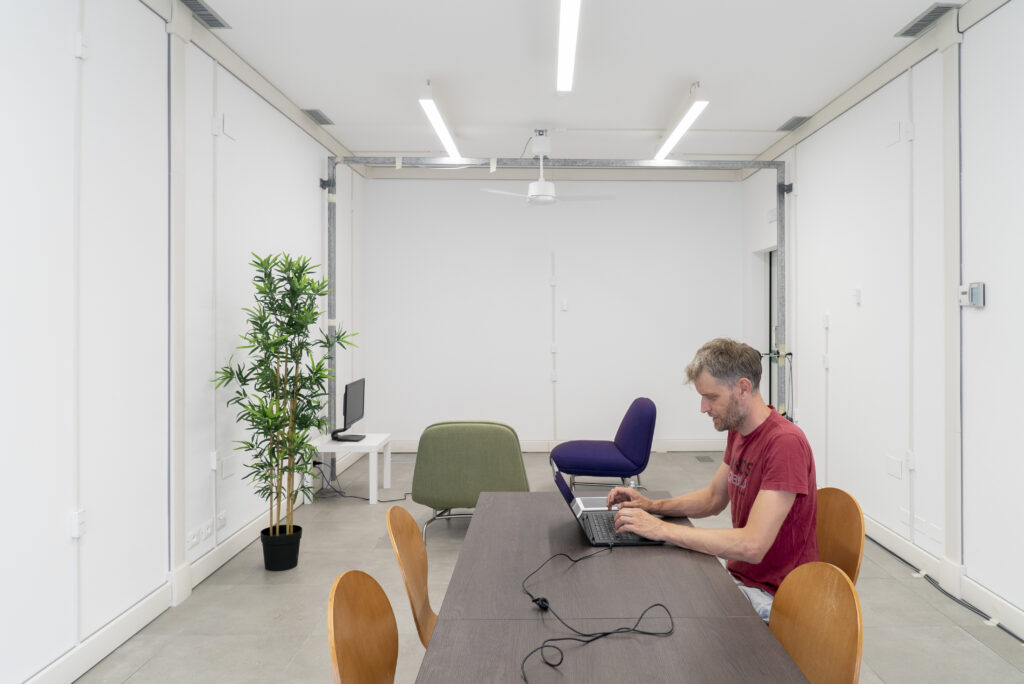 In a warming climate, it is essential to curb the growing energy demand for comfort cooling in new and existing buildings while providing a reliable technological answer to the ever more intense heat waves.

Air movement can be an effective means to provide comfort cooling in warm environments as it increases the heat transfer from the human body to the environment. Furthermore, ceiling fans offer this cooling sensation at much lower energy cost than air conditioners. In addition to the impact on thermal comfort, elevated airspeed is proven to impact perceived air quality positively. Several studies suggest that air movement can be effectively used instead of air conditioning to provide cooling at temperatures slightly higher than 30°C, and more recent research proved that there are benefits up to 35°C.

As part of H2020 4RinEU project (grant agreement No 723829), it was developed an algorithm with the capability of automatically adapting a ceiling fan’s rotational speed based on the temperature and relative humidity values measured in the room. The algorithm was designed to ensure thermal comfort (90% satisfaction) in warm and hot conditions (26°C – 34°C) for different activity levels and was later implemented into a commercial residential ceiling fan produced by Vortice. As part of the Cultural-E project, researchers from Eurac, University of Venice and Vortice in the past summer performed a climatic chamber experimental study with human participants in order to test this user-centered technology.

The aim of the experimental campaign with human subjects was to analyse the effectiveness of ceiling fans, with manual or “smart” operation using the 4RinEU algorithm, to provide comfortable cooling conditions and to detail information that can be useful for further product development.

The main objectives were: (i) to test the effectiveness of the smart ceiling fan in terms of resulting comfort (thermal comfort, indoor air quality (IAQ) and acoustic comfort); (ii) to test comfort differences between a manual and an automatic mode of operation of the ceiling fan; (iii) to test comfort differences depending on the direction of rotation of blades (direct vs. reverse); (iii) to derive the (spatial) speed / (operative) temperature relationships for the different modes of control and blade rotation.

The research project involved 30 volunteers and was performed within the Eurac Research Façade System Interaction Lab (Bolzano, Italy), whose climatic chambers were set up as two residential environments (i.e. a living room) according to the aim of the test. Each participant experienced three different temperatures (27°C, 29 °C and 31 °C) and three different control and flow directions modes:

Overall, this study provided experimental evidence to say that the automatic control algorithm developed in H2020 4RinEU project is effective in providing comfort cooling in warm and hot indoor environments. When the fan is used in direct flow mode, the comfort level achieved with the automatic control is the same people experienced when they had manual control, but without requiring them to do any actions. The cooling effect of the fan was then modelled in dynamic energy simulations to show how to do so and to highlight the energy savings that can be achieved without jeopardizing thermal comfort.

More specific points are as follows.

More information can be found in the technologies section of our website and soon among our reports. Previous Post
Cultural-E will be presented at the SBE22Delft
Next Post
Have you missed our EUSEW 22 hybrid events? Watch the recordings!

This website uses cookies to improve your experience while you navigate through the website. Out of these, the cookies that are categorized as necessary are stored on your browser as they are essential for the working of basic functionalities of the website. We also use third-party cookies that help us analyze and understand how you use this website. These cookies will be stored in your browser only with your consent. You also have the option to opt-out of these cookies. But opting out of some of these cookies may affect your browsing experience.
Necessary Always Enabled
Necessary cookies are absolutely essential for the website to function properly. This category only includes cookies that ensures basic functionalities and security features of the website. These cookies do not store any personal information.
Functional
Functional cookies help to perform certain functionalities like sharing the content of the website on social media platforms, collect feedbacks, and other third-party features.
Performance
Performance cookies are used to understand and analyze the key performance indexes of the website which helps in delivering a better user experience for the visitors.
Analytics
Analytical cookies are used to understand how visitors interact with the website. These cookies help provide information on metrics the number of visitors, bounce rate, traffic source, etc.
Advertisement
Advertisement cookies are used to provide visitors with relevant ads and marketing campaigns. These cookies track visitors across websites and collect information to provide customized ads.
Others
Other uncategorized cookies are those that are being analyzed and have not been classified into a category as yet.
SAVE & ACCEPT
Powered by